An instant messenger which can connect to AIM, GTalk, Jabber, ICQ, and more.
Post Reply
55 posts

If I meant a particular person, I'd have said so. Pointing out limitations is useful in a discussion, and that's of course a windfall

I believe some improvements have already been made to the tab system IIRC.
Try my software!

Gotcha. Wasn't sure, and it's easy to misinterpret what someone says online, as I'm sure you know. I feel pretty passionate about tabs for some strange reason, so I'm sure I'll let you guys know if I have any thoughts on the matter

But I do have an idea. but I don't know if it's possible to code or achieve.

What if the tabs that aren't visible go into a group (like now that popup), and when a msg was recieved on one of those tabs, the one that recieved the message jumps up to the top of the list (or even visible in the tabs bar.
won't that be a solution for the problem of knowing where the message (or anything else) was recieved?

Wouldn't this kill predictability though? If I had 5 chats visible, 4 in overflow, and 1 from the overflow jumps up to 3 (the first 'not unread' slot) then if I hit Cmmd+3 or navigate over there it's not the tab I expected and I then have to make sure to check the tab title before I switch or I pay the cost of reading a message I didn't expect. Not trying to be a wet blanket, just noting an issue as I see it.
Try my software!

Now I will continue,

when one of the 4th in the overflow jumps to the "3rd" slot of not read yet and the user go and read the first slot, when user reads (without answering) it,that tab goes back on the end of the line, and then the 2nd and 3rd slot jumps goes one slot up .
Wouldn't that help?

I know it's hard to figure a good solution (maybe you guys already have)... just maybe you guys can find something usefull in any idea you might get here from us the users.

One thing that I should have mentioned earlier was that the message counts in the actual tabs shift around the tabs a lot, which is a little annoying when I have a lot of tabs open. It just seems a little unintuitive to have tabs shifting positions when there are unread messages in a tab or when the messages are finally read.

Has this been discussed at all? And if there are no plans to change this feature, what about a preference to disable this feature?
Top

thanks zac, looking at it!
Top

Echidnae wrote:And if there are no plans to change this feature, what about a preference to disable this feature?

Yep, for the moment I don't see anything as ergonomic as how it was before... but I'm sure some people would enjoy these improvements... so I vote for it to be optional, with either a contextual menu, or a simple checkbox (I love checkboxes

It's not a good idea to include choices such as old/new behavior for preferences. It needlessly complicates things. A workable solution should be found and used instead

bgannin wrote:It's not a good idea to include choices such as old/new behavior for preferences. It needlessly complicates things. A workable solution should be found and used instead

Gotcha...the reason I asked about the pref was because I saw its function similar to the dock badge, which there is a pref for. I do see your point though.

I don't mind the badges/message number in the tabs, in fact I like the idea. But my problem with them is that that when they do appear, it shifts all of the tabs' positions. This is annoying especially when it shifts some tabs into the overflow arrow. It seems a lot harder to keep track of IMs when some are shifting in and out of view.
Top

bgannin wrote:It's not a good idea to include choices such as old/new behavior for preferences. It needlessly complicates things. A workable solution should be found and used instead

I understand what you mean, but "hiding new tabs" can be check, as it can please to some people... as I can't support because it's totally unusable for me. All the other systems found here brings up new "problems" each... of course I hope a miracle solution will pop up to your mind, but if final release is out with this only tab behavior, it would be a real wayback...
Top

Here's my take on the new tabs... I find it _really_ disorienting to be chatting with a contact who is a "hidden" tab, without that tab visibly appearing in the tab bar. I realize the title of the window indicates who I'm talking to (though the title does not support the "hover over the tab and see which accounts are talking" functionality), but I never (used to) read the title bar; I always (used to) depend on seeing the selected tab. Having to look both at the top of the window (to see who's talking) and the bottom (to potentially switch people, see who else has sent messages, etc.) is somewhat schizophrenic.

Also, it seems to me that if the tabs are in a vertical orientation, maybe they should just get a scrollbar when there are too many of them; Apple's apps with sidebars (iChat, iPhoto, etc.) all work this way, and it's pretty intuitive; and it seems to me that a set of tabs on the left side of the window basically amounts to a sidebar (*). Horizontal ones... well, that's harder to deal with, and I don't know what the right solution is, but I do know the current one is pretty disorienting.

Another little note on tabs in the vertical orientation: can there be an option to _not_ display the user icons with them? If there is such an option already, I can't find it. For me, the icons just use precious vertical space, since I already have them sitting in my contact list...


(*) Actually, it seems to me like such tabs ought to be in a drawer, a la OmniWeb's tabs and Proteus's tabs - this essentially being exactly the type of usage drawers were invented for - but I imagine that idea was discarded already.
Top

dmz wrote: (*) Actually, it seems to me like such tabs ought to be in a drawer, a la OmniWeb's tabs and Proteus's tabs - this essentially being exactly the type of usage drawers were invented for - but I imagine that idea was discarded already.

dmz wrote: (*) Actually, it seems to me like such tabs ought to be in a drawer, a la OmniWeb's tabs and Proteus's tabs - this essentially being exactly the type of usage drawers were invented for - but I imagine that idea was discarded already.

Agreed. I like the current implementation best as iChat's is even similar in Leopard. Surprised draws haven't been taken out for good in Leopard, most things now a days go in a sidebar which Adium is kind of doing with vertical tabs.
"Bite my shiny metal ass!"
- Bender

Yeah, I know drawers look weird on Leopard (I'm a Select developer too)... it's just sad to see such a nice piece of user interface discarded in favor of sidebars, which are basically the same thing except that you have to see them all the time.

Obviously not the fault of anybody around here, though.

That having been said, would a scroll bar for the sidebar, if the tabs are viewed as a sidebar, be a possibility? With the contact icons being displayed, it doesn't take a lot to fill up that sidebar... and even without, it's still not that hard if one talks to a lot of people.
Top

hmm... now it's becoming weird... arrow has not disappeared, but cutting name is here too... and does not act wisely... 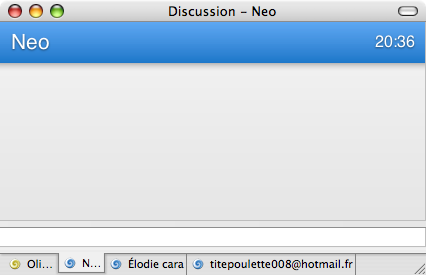 Short names are cut, while long ones are still here... and then, when my irritating arrow appears, small names are displayed back... 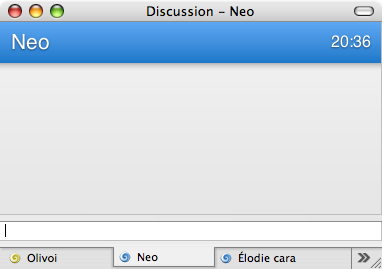 Are you using the latest SVN? Beta 5 doesn't have all the latest tab changes.
Top

zac wrote:Are you using the latest SVN? Beta 5 doesn't have all the latest tab changes.

just curious, how do you get the latest svn?
Top

zac wrote:Are you using the latest SVN? Beta 5 doesn't have all the latest tab changes.

just curious, how do you get the latest svn?

However, b6 will be out shortly, which has all the latest updates to tab sizing.
Top
Post Reply
55 posts