An instant messenger which can connect to AIM, GTalk, Jabber, ICQ, and more.
Post Reply
19 posts • Page 1 of 1

I've just updated to the latest beta version and I've been unable to change the font size in message windows. After updating the client, the font was automatically enlarged (without me modifying it). I'm using MSN as my protocol. I've tried multiple different fonts and font sizes (as well as bold / italics etc) and the fonts within the message windows do not change from this enlarged font that displayed after updating. I reinstalled the normal version of Adium and confirmed that fonts would change OK there, and then reinstalled the beta to be sure it was the update (and not something I've done) that caused the issue.

Has anyone else came across this? Is it happening for all protocols? Are there any known workarounds?

Which message style do you use? MANY of them received updates for b19.
Top

The message style I'm using is:
Stockholm - Blue on Green

The font seems to change when you type it into the input box (although it doesn't look like the fonts I've chosen, it's just different to the Default), but the output size is still the same in the message box. I've also noticed with Tahoma and Helvetica that the output font displays as bold too, when bold isn't selected. The output size and the font face seem to stay the same as Default.
Top

There's nothing in Stockholm (or any other bundled style) that assigns a fixed font size. Do you see this problem with any of the other bundled message styles? What about other styles that have been downloaded from adiumxtras.com?

Do the font sizes change when you change them in the messages pane of the preferences window?
Matthew
Top

These are the only font-related changes for 1.4 I can remember.

Edit: but apparently, there's others:
http://hg.adium.im/adium-1.4/log?rev=font.

I was seeing this right after I updated. Once I changed my message style/variant to something else, then back to minimal_mod, I was able to change settings normally.
Top

Thanks for the replies guys.

Now I'm more awake I've done some more testing (and paid more attention) I need to apologise - it's not Stockholm it's Renkoo that I'm using.

I left the font preferences pane open while trying out different fonts. I would open the fonts pane from the normal menu rather than from the message window; change the font, close it, and reopen it. The font I changed it to remained in the preferences window. I then typed a test message (pic attached) and the font window font changed to Helvetica (12) once the message was sent. It looks like all messages I'm sending via the Renkoo style are coming through as Helvetica (12) font.

I repeated the above using the font preferences via the message window, and the same thing occurred.

I've just repeat the above using a couple of different styles (Minimal_Mod & Gone Dark) and the problem doesn't occur. I also noticed when flicking through different font faces in the preferences pane, it would update the font in the open message window to the one highlighted at the time in the preferences (as it previously used to). It looks like it's something specifically to do with Renkoo. 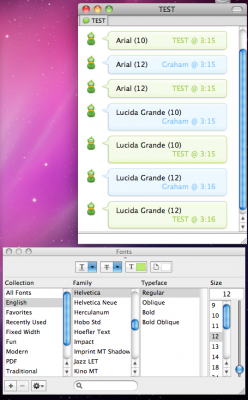 It looks like there's a CSS loading issue that I should be able to fix for the next beta.
Matthew
Top

I've just been playing around some more - I changed the style one at a time to each of the built in ones (starting from the top of the list working down), and then reverted back to Renkoo after each change. When I changed it from Smooth Operator back to Renkoo, the font sizes in Renkoo corrected themselves and is now working as it should...

To recapitulate:
using Renkoo and after updating to b19
- the font was enlarged (to 12 from?)
- no matter which font you selected Helvetica 12 was shown?

I'm using the Stockolm message style, customized, and I am unable to change the font or size, even if I edit manually the plist.

Using Minimal_mod, Blue vs Black, Optima Regular 12 ... no problems at all.

Edit: On first re-opening, I did have to reset the font and the colour combination, but the former worked instantly and the latter when I closed Adium and re-started it ... not unexpected.
Top

This was the first thing I noticed when I downloaded b19.

The font size can be changed via Messages: Text Display, but the size displayed seems to be 1pt smaller than the size set.

Caifo wrote:I'm using the Stockolm message style, customized, and I am unable to change the font or size, even if I edit manually the plist.

Customized in what way? What plist did you manually edit?
Matthew
Top

Font and background changed only.

I've tried editing the plist inside the .AdiumMessageStyle bundle with no luck.

Where did you change the font and background? In the .AdiumMessageStyle bundle? Where is the customized version located?
Matthew
Top

That will cause problems if you haven't customized the values for cfbundleidentifier and cfbundlename (in info.plist).
Matthew
Top

I think I'm also seeing this, with h4x0r2 (variant 'Original') and Monaco 9 as the font.

h4x0r2 uses a fixed width font; visually, the displayed font is compressed, with a gap between the nick/handle and the message; it appears to be Monaco 9 when pasted with style into an editor, though.
Top
Post Reply
19 posts • Page 1 of 1