this morning Vienna keeps on deadlocking on me when moving to some folders (either by cliking on them in the source list or by using the 's' key to mark the current one as read and moving to the next feed).

I've attached a crash report after one of such deadlocks, in case it provides some clues.

Thank you for reporting this.

I hope we can find the cause. How many feeds and folders do you have? Are you able to Export Subscriptions and attach them here?

Thanks!
I help with Vienna development.
Top

here you go. Right now it deadlocked on the "Downloadcrew - Latest software" folder, but it might not always block in the same way.

Oh, by the way, the rotating progress indicators flicker like hell since Yosemite ;-)

@wiz : it would be interesting to know the layout and the style you use (as set in View menu)
I contribute to Vienna RSS as a developer.
Please, don't forget those tips for writing a good bug report
Top

Maybe related, I just had Vienna hang when deleting a feed. It didn't beachball, it just stopped reacting to user input - except double-clicking on a feed did open up the suscription home page. I'm using horizontal layout, and the Feedlight Aqua style. Process sample attached.

barijaona wrote:@wiz : it would be interesting to know the layout and the style you use (as set in View menu)

layout: report, I guess ("Rapporto" in Italian, the first one)
style: FeedLight Graphite 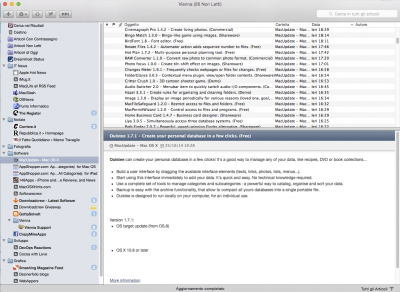 @barijaona do you think this could be an sqlite corruption? If so perhaps it would be useful if @wiz uploaded the messages.db ?
I help with Vienna development.
Top

In the week that I’ve used Yosemite, I haven’t seen any crashes as noted by the OP. Vienna sometimes tends to hang briefly when arrowing down/up between articles (I mostly use smart lists) though — It is not really a hang I think, but Vienna briefly lags between key input and response.

Might be related: today, when setting up Vienna in an other user account, it hanged when attempting to delete 2 feeds at once (both feeds containing only unread articles). Similar issue as user “Stern” above probably. Vertical layout, default theme, default OPML - really everything default.
Vienna didn’t beachball, just stopped doing anything / responding to any input. At the same time I saw the memory consumption going through the roof, and force quit the app.

I've raised issue #377 on GitHub to investigate this.
Thanks everyone for your reports and logs!
I help with Vienna development.
Top
Post Reply
9 posts • Page 1 of 1