I get the error msg: ":“Vienna” can’t be opened because Apple cannot check it for malicious software" and am told to contact the manufacturer to make an update. I have been using Vienna on my old MacbokPro with High Sierra but this is happening with a new laptop under Catalina. What can I do?
Top

On High Sierra, there's an option in the System Preferences > Security & Privacy > General panel to Allow apps downloaded from:

You can choose This means that a developer must build the app using Apple's Tools with a registered developer's signature. It puts an signature ID on the app that's checked at run-time. This is also a requirement to submit the app to the Apple Mac Store.

I think that's been expanded to prevent Apps which don't have a signature from launching under later versions of the OS. Check to see if there's another option to allow non-registered Apps to run. You'll need to unlock the panel with your Admin password.

I don't think Apple will go as far as preventing all undregistered Apps to run by removing that option. There's enough unrest in the MacOS community with the 30% lifetime revenue split between Apple and developers who use the Apple Store to distribute. I also think that if you don't pay the yearly Apple Developer fee, you developer's signature is deactivated. It's their version of vendor lock-in.

There's a tool you can install from Objective-C called "What's Your Sign" https://objective-see.com/products/whatsyoursign.html that adds "Signing Info" to the Right-click Finder menu. On my High Sierra system, it shows (see attachement), so the developer is signing their app. You may have the default setting to only allow App Store Apps to run. 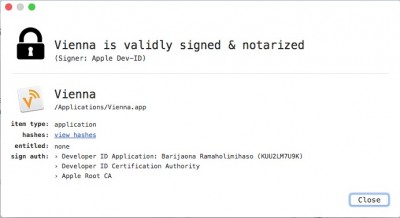 Thanks for the info. I opened the System Preferences > Security & Privacy > General page and, with it open, tried again to open Vienna. The system stopped me again, but when I chose the Show in Finder button instead of OK, the preferences page suddenly showed an option to open this one app by unlocking the lock and checking it. I'm in!
Top

To tell Mac to open applications from everywhere and be done for good you have to disable Gatekeeper and if that wasn't enough to remove the digital signature (involved unhiding flags and stripping extended attributes) by running the following commands in Terminal:

Please, use version 3.5.6 (or later) of Vienna. The app is now notarized, so is compatible with Apple's hardened security settings.
I contribute to Vienna RSS as a developer.
Please, don't forget those tips for writing a good bug report
Top

This company is now really taking the lead in software development. If you have your own business and want to create software for your devices, I would like to give you advice to consider the option of outsourcing software development and mobile applications. While the developer is developing, you can devote your time to core business operations. This saves costs on infrastructure, resources, training of professional developers.
Top
Post Reply
6 posts • Page 1 of 1